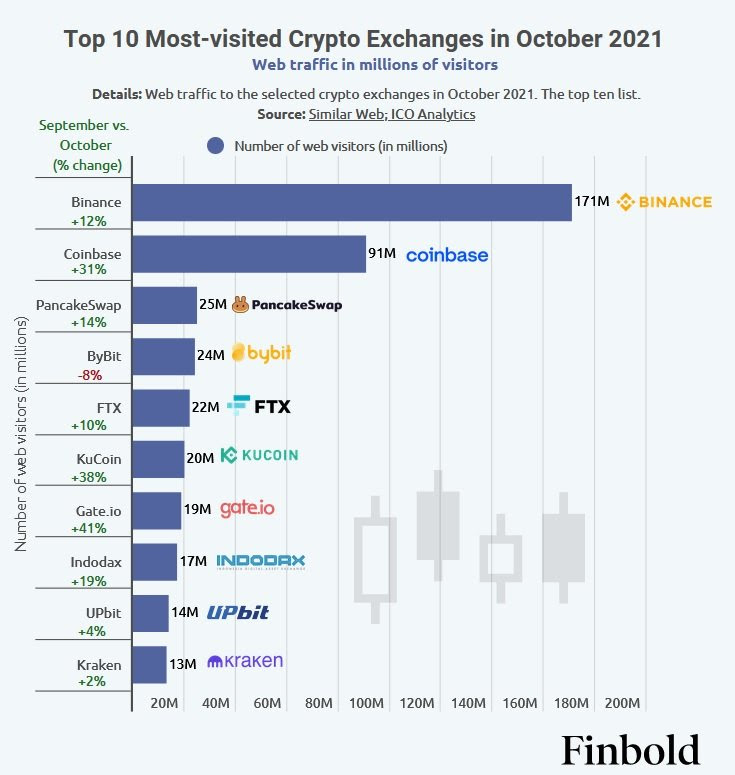 For years, Binance has remained a top cryptocurrency exchange attracting diverse users globally. However, recently the exchange has faced regulatory woes but has managed to retain a high number of visitors.

According to data acquired by Finbold, Binance recorded the highest web traffic among digital currency exchanges in October this year at 171 million. The number of visitors grew 12% from September’s figure. Coinbase emerged, second adding 31% more visitors in October to 91 million. PancakeSwap ranks third with 25 million visitors.

Among the top ten exchanges with high visitors, only ByBit recorded a drop of 8% to 24 million in October. FTX ranks fifth with 22 million visitors, a growth of 10% from September.

The report highlights factors contributing to increased visits in October. According to the research report:

« It is worth noting that most of the exchanges recorded an influx of visitors between September and October. During this period, the crypto market was recovering after plunging mid this year. At the moment, Bitcoin was heading for another all-time high. Therefore, the visitors potentially highlight the number of investors intending to profit from various growing assets. »

Notably, cryptocurrency exchanges are crucial junctures between users and the broader blockchain ecosystem. However, the sector is facing scrutiny from regulators globally that might impact the general uptake among users.

Furthermore, the exchanges need to remain competitive as more players join the scene.