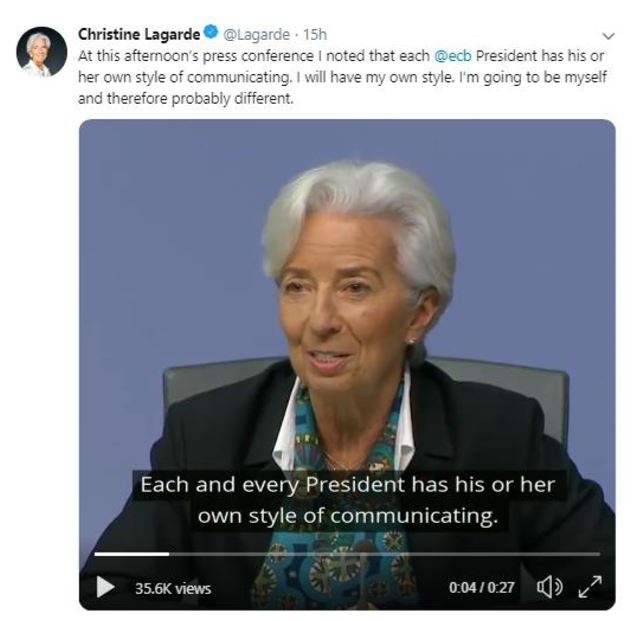 For the first press conference of Christine Lagarde as ECB president, no change has been announced in terms of monetary policy. One of the reasons for this is that a large package of measures had been announced in September before the departure of Mario Draghi (resumption of the quantitative easing, rate cut, implementation of tiering system, strengthening of the forward guidance). However, Christine Lagarde gave the outline of the strategic review that the ECB will carry out throughout the year 2020, starting in January. After the revolution of the Draghi years, the ECB could therefore undergo profound changes under Christine Lagarde, especially with an increased consideration of the mega trends taking place in the economy.
The last ECB strategic review took place in 2003, a time when inflation was regularly close to its target, where excess liquidity was close to zero, where it seemed inconceivable that interest rates could be negative, where favorable demographic trends still allowed a solid growth pace. The digitization of the economy was much less advanced and there was still very little talk about the rise of inequality and about climate change. It is not enough to say that the world has changed since, and Christine Lagarde is clearly right to say that a new strategic review is « overdue ».
During the press conference, Christine Lagarde provided some elements on the 2020 strategic review:

On the other hand, one can also expect more collaboration with the European authorities. If Christine Lagarde insisted on the importance of the independence of the ECB, she clearly shows that it is necessary for the different European institutions to work together: « It is necessary that the various European institutions work together. I do not see anything wrong with policymakers actually agreeing that they’re going to make the efforts that they can in order to reach their respective goals.” One of the topics on which collaboration could intensify as a priority is the fight against climate change.

In the end, just several weeks after her arrival, Christine Lagarde gives the impression that she already wants to change everything at the ECB while the latter has just experienced radical changes in the Draghi years. Thus, the institution will continue to evolve, mainly at the institutional level and perhaps less in terms of monetary policy per se, and should be more involved in the major changes in the economy. Christine Lagarde indicated during his press conference « I will have my own style » and it is clear that his style of communication is already very different from that of Draghi.