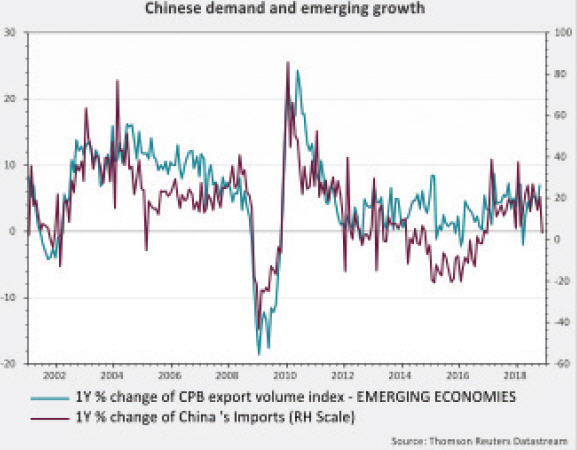 Your main three-month risk scenario is based on a loss of investor confidence that would ultimately affect global growth. Is China a factor in this trend?

It is clear that rising trade tensions, which have gradually been refocused on bilateral trade between China and the United States, signifi cantly affected investor confi dence over the course of 2018. The fact that this occurred simultaneously with a string of bad statistics in China immediately fuelled additional concerns about the soundness of Chinese growth. Most observers instantly concluded that the trade war was having a negative impact on Chinese growth. We believe, however, that the source of the Chinese slowdown lies elsewhere. The fact remains that signifi cantly weaker Chinese growth will have a considerable impact on global growth, particularly as the United States, the other super power, appears to have reached the peak of its economic cycle.

So what is the current status of the chinese economy?

Growth has slowed since the end of 2017, and not only in the surveys since the downturn is visible in most of the country’s economic statistics. The peak came with the publication of a sharp drop in third-quarter GDP to 6.5% after 6.9% at end-2017. If GDP, in theory being the most closely scrutinised fi gure in China, is declining, it’s because something is going on. Contrary to what is often suggested, this slowdown does not come from external demand but rather from internal demand. The authorities have implemented several regulatory measures whose effects became visible and intensifi ed in 2018. One example is the crackdown on shadow banking, which resulted in fewer fi nancing options. The fi rst impacts were felt on infrastructure investment, with the local authorities also altering their investor behaviour at the urging of the central authorities, in the context of their anti-corruption policies. Other measures are also having a negative impact on activity, including anti-pollution measures, which have caused factories to close. The real estate market has also been subject to several regulatory measures that aim to curb rising prices. Next, the elimination of car purchase subsidies, coupled with tougher conditions for granting vehicle licences, caused car sales to collapse, the primary reason for the slowdown in consumer spending during the year. It is clear that this slowdown in internal demand is multifaceted.

Could this slowdown in internal demand intensify?

That is clearly now the markets’ main concern. It is not, however, our core scenario. The authorities have not been idle since the summer when weakening growth was confi rmed. They have announced additional easing measures, whether regulatory, monetary or fi scal. We are admittedly nowhere near a massive stimulus plan, similar to what was seen after the great recession. This time they are talking about more targeted, small-scale measures. This is, moreover, what sparked concerns in the markets, which had, until then, observed only a minimal impact from these measures on the published indicators. It’s important to be realistic, however, some of the measures have not yet taken effect due to their specifi c timetable; that is true, in particular, for the measures to lower income taxes on modest households, which should have a signifi cant impact on their purchasing power and will take effect as of 1 January 2019. Furthermore, some of the methods used to fi nance investments (in particular by issuing special bonds) are subject to annual quotas, approved by the National Assembly in March. The full effect of the measures announced thus far should therefore be felt in fi rst-quarter 2019 and will likely stop the slowdown. It is consequently still too soon to gauge the actual effectiveness of the government’s measures. We could therefore see a few more disappointing publications before the trend reverses.

Are the chinese authorities ready to increase economic stimulus if the impact of trade tensions intensifies?

The government’s commitment is clear and unambiguous. That is the message from President Xi’s highly political speech on the 40th anniversary of the opening initiated by Deng Xiaoping. No one will tell China what policy to follow and every effort will be made to contain the negative impact of the trade sanctions on the national economy. The statement released at the close of the Central Economic Work Conference also leaves no doubt as to the authorities’ determination to avoid a sharp slowdown in the economy. Additional easing measures can therefore be expected in the coming weeks. President Xi cannot afford to reach 2019, the year of the 70th anniversary of the creation of the People’s Republic of China, with a growth rate no longer able to absorb the natural increase in the labour force, i.e., a growth rate of 6%-6.5%. The trade-off will likely be a halt — hopefully temporary — to the structural reforms initiated a few quarters ago. That is in fact what we can infer from the statement by the governor of the PBOC: “shadow banking is a necessary supplement to the banking system”! 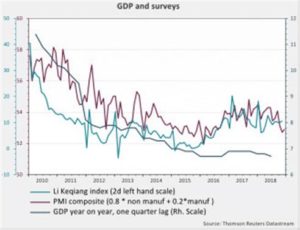 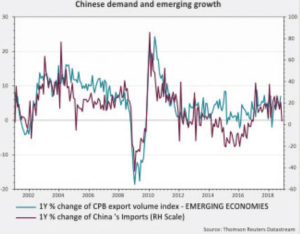