Juliette Cohen and Bastien Drut, Strategists at CPR AM

It would be a mistake to think that the macroeconomic consequences of climate change will materialize only in the future. The economic impacts of climate change are actually already very visible today. One of the most telling examples of 2018 was Germany, the world’s fourth-largest economy, which saw its economic growth severely hit by extreme weather events.

Indeed, 2018 has simply been the hottest year in Germany since 1881, the year from which climate data began to be measured on a regular basis. In addition, there was very little rain in Germany in 2018: cumulative rainfall over the six months from June to November – usually the rainiest period of the year – has never been so low since 1881. The direct consequence of this lack of precipitation has been a sharp decline in the level of German rivers: Rhine, Elbe and Danube. In particular, the level of the Rhine was in October and November at extremely low levels, never seen until then. While the decline in the level of the Rhine is not uncommon, the most striking feature of 2018 is that the low rainfall continued over time and caused a very low level of the Rhine for more than two months. As we will see, this has seriously disrupted the transport of goods on the Rhine. 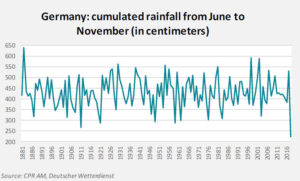 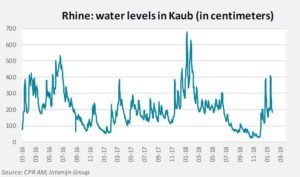 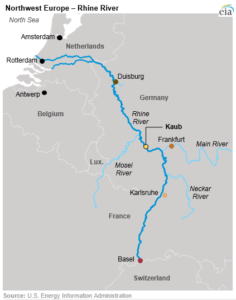 The Rhine is 1,230 kilometers long and connects the Alps to the North Sea, crossing or bordering six countries: Switzerland, Liechtenstein, Austria, Germany, France and the Netherlands. The Rhine basin is under intense exploitation, especially for transport because it is the main inland waterway in Europe: the Rhine accounts for two-thirds of the volumes transported by inland waterways in Europe in terms of volumes transported, ie 186 million tonnes of goods in 2017 according to Destatis (German Federal Statistical Office). It connects the port of Rotterdam, the world’s ninth largest port and the largest in Europe, with the largest river port in the world, Duisburg. Finally, unlike most other European rivers, goods transport on the Rhine is very diversified: petroleum products, coal, chemicals, etc. This is to say the important role that the Rhine plays for the German economy. 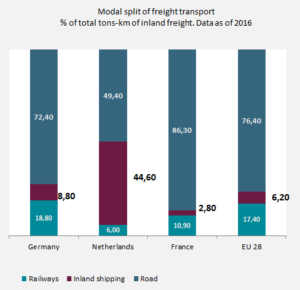 What impact has the decline in the Rhine level had on economic activity?

The lowering of the water level below certain critical thresholds has had negative impacts in many sectors of activity and more particularly on inland waterway transport, energy production, industry or agriculture.

The very low levels of water reached by the Rhine in November and December, less than 10 centimeters in Emmerich (in North Rhine-Westphalia), have reduced the cargo on the barges that go up the river from about 75% compared to usual loads. Some freight transport flowed on the upper Rhine between Kaub and Basel have even had to be totally stopped for nearly a month. In its profit warning of 8 November, the steel group Thyssenkrupp mentioned, among other explanations, that it had been affected by delays in the supply of raw materials.

Declining water levels and consequently loading levels have resulted in significant increases of freight costs. For example, the cost of transporting gasoline between Amsterdam and Duisberg has increased from 6 euros to more than 30 euros per ton in October 2018. The impact on companies’ earnings has been even more important as road and rail transport capacities are limited by existing infrastructure but also by a shortage of truck drivers in Germany.

The Rhine is a particularly popular route for liquid petroleum products flows from the Amsterdam-Rotterdam-Antwerp hub into the interior of Europe. Normally 100,000 tonnes of diesel are transported each week from Rotterdam to Germany. With transport difficulties, oil stocks rose in the Netherlands and fuel shortages were observed in Luxembourg, Germany, France and especially Switzerland. For the fourth time in 40 years, the German government has even had to tap into its strategic reserves of gasoline to avoid supply disruptions. 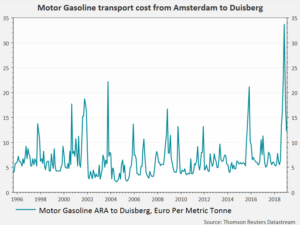 The chemical industry, which represents 8% of the total turnover of German industry, was also particularly affected by the exceptionally low level of the Rhine. It uses the Rhine both for the transport of raw materials and finished products but also for the cooling of its facilities. However, the restrictions on the water withdrawal for cooling decided by the authorities have led to significant production slowdowns or even the total shutdown of some factories. Companies have also experienced a sharp rise in river freight costs. BASF, for example, relied on force majeure and had to temporarily close its Leverkusen plant. BASF has estimated that this has reduced profits by 250 million euros, which is equivalent to 6% of its profits in the previous year.

Other companies specialized in chemistry like Covestro or Solvay have had to reduce their production due to lack of raw materials. Overall, the German chemicals sector saw a 10% drop in production at the end of November year-on-year, amplifying the trend in the German industry as a whole. 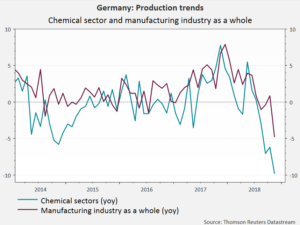 German automakers also reported Rhine-level production disruptions, adding to the difficulties already experienced by the industry in relation to slowing Chinese demand and regulatory change (WLTP). Indeed, Duisburg, the main port of the Rhine, is home to both the largest spare parts center of the Audi group and the Volkswagen logistics center.

Lastly, the decline in the Rhine level also had an impact on the production of hydroelectric plants (due to lower flow) and coal-fired plants (because of the coal supply and restrictions on the use of water for cooling purposes). Indeed, 10 large hydropower plants and 2 small plants are located on the banks of the Rhine between Basel and Lauterbourg.

Lastly, the accumulation of production disruptions due to the low level of the Rhine was a significant negative shock at the macroeconomic level in the 3rd and 4th quarters. The German think tank IFW (Institute for the World Economy) estimated that this had cost 0.2% quarterly growth in Q3 and 0.1% in Q42. In other words, economic activity would not have contracted in Germany in Q3 if the Rhine had not been so low (as a reminder, growth was – 0.2% quarter over quarter in Q3). In addition, the drop in the level was so strong in October and November that we can think that the effect was even stronger in Q4. In the end, the extreme weather conditions had to cost Germany at least 0.3 growth point in the year 2018. However, the return of rain from December and therefore the rise of the Rhine level should imply a significant rebound on Q1 2019.

Notably because of the importance of the Rhine in the German industrial fabric, Germany is vulnerable to climate change, and in particular to possible sharp drops in precipitation. The drought episode of the 2nd half of 2018 showed the limits of German infrastructure and the lack of alternatives with regard to the transport of goods in cases of sharp decline of the Rhine. As early as 2013, the International Commission for the Protection of the Rhine (ICPR) had published a study report on the effects of climate change on temperature and water regimes as well as a climate change adaptation strategy but the implementation measures are waiting. For their part, industrialists are calling for the development of new infrastructures (locks, dams) that would allow maritime routes to be used in the event of drought episodes, which would require major dredging work. The design of future infrastructures and the maintenance of existing infrastructures will therefore absolutely have to integrate the eventual realization of exceptional climatic events. This seems all the more necessary as in the different scenarios envisaged by the ICPR, exceptional events, floods and drought, should be more frequent. This example, and in particular the relatively unexpected and severe consequences for the German economy in 2018, perfectly illustrates the challenges of climate change for the global economy.