Markets no longer believe in the ability of the ECB to raise its key rates in 2019 and the theme of the Japanization of Europe is coming back. A comparison with the Fed’s experience in recent years allows us to see more clearly.

The ECB had to maintain relatively optimistic communication until the end of 2018 to justify the end of its QE program, which was approaching the technical constraints self-imposed by the ECB (the Eurosystem must not hold more than one third of a country’s bond debt). Once the asset purchase program officially ended, the ECB had more explicitly acknowledged the economic slowdown in the Eurozone and Mario Draghi suggested that rate hikes would come much later than what the current forward guidance may suggest (it says: « We expect rates to remain at their current levels until at least summer 2019« ).

The ECB is four years behind the Fed. While the US and European cycles were broadly in line with the 2000s, the eurozone crisis introduced a shift in economic and monetary cycles of about four years between the US / Fed and the euro zone / ECB on the other hand. Indeed, for a large number of economic or financial events (peak unemployment, QE announcement, announcement of the end of the QE, low point of the currency, low point of long-term rates, etc.), the eurozone is about four years behind the United States. Following this logic, the year 2019 of the ECB should strongly resemble the year 2015 that the Fed experienced, that is to say, a year of skepticism and doubt about the ability to raise – at least one – the key rates.

When the Fed stopped its asset purchases in Q4 2014 (October 2014 was the last month in which net purchases of securities were made), the markets expected the Fed to raise two times the fed funds in 2015 and four times in 2016. At the December 2014 FOMC, the median « dots » projected 4 rate hikes in 2015 and even more in 2016. Eventually, the Fed has yet raised the fed funds only once in 2015 – in December – and waited a year to make its second rate hike. The continuing slide of oil prices from mid-2014 to the end of 2015 had a significant impact on inflation and inflation expectations (an element mentioned in the January 2015 FOMC press release), which had caused the FOMC members to doubt and delay the first rate hike. This movement was also accompanied by a substantial appreciation of the dollar, which had contributed negatively to growth, and fears about the Chinese economy (exacerbated by the devaluation of the renminbi in August 2015).

The parallel with the current situation in the euro area is striking. The end of the ECB’s QE in 2018 coincided with three quarters of below-potential growth (technical recession in Italy and a near-recession in Germany). Doubts about the economic outlook in Europe have accumulated and worries about Chinese growth have resurfaced. As a result, long-term inflation expectations have fallen sharply over the past weeks, with inflation breakeven points to their lowest level in a year and a half. In a context of underlying inflation near stagnation around 1% in recent quarters, even the most hawkish governors have expressed their desire to pause the reduction of monetary accommodation. It will now take many months for the Governors to be reassured about the inflation outlook. 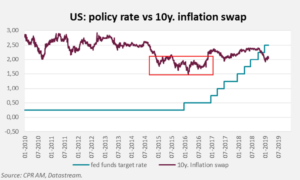 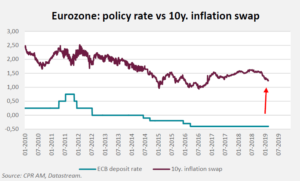 What does it take for the ECB to ‘really’ raise its rates?

After a rate hike in December 2015, the Fed was only able to accelerate its pace of rate hikes in December 2016, with a rise per quarter until December 2018 [1] . The rebound in oil prices and in inflation expectations, as well as the fact that the unemployment rate had clearly fallen below its long-term level (thus giving a guarantee on the future evolution of inflation) has enabled the Fed to move forward from the end of 2016. The rate hike cycle was then able to continue thanks to the synchronized acceleration of global growth in 2017 and the adoption of the tax reform of the Trump administration, which boosted the US economy in 2018. 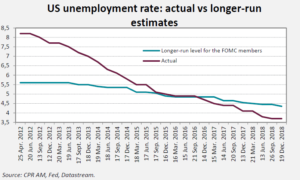 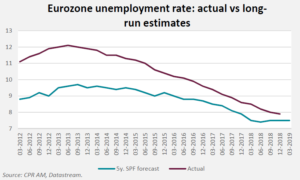 In the euro area, labor market conditions are improving, but full employment is not yet achieved. On the top of that, large disparities remain between the Eurozone countries and total underemployment, ie labour market slack other than unemployment, remains significant (involuntary part-time work, people too discouraged to look for a job, etc.). If it follows its H2 2018 pace, the unemployment rate in the euro zone (7.9% in December) should reach around 7.5% at the end of 2019, which will correspond with the long-term unemployment rate estimated by professional forecasters [1] . Reaching the long-term unemployment level may allow the ECB to show more confidence in the inflation outlook. In this case, a rate hike by the ECB at the end of 2019 / early 2020 cannot be ruled out. However, this would most likely not be the starting point for a real cycle of rate hikes.

The example of the Fed shows that a cycle of regular rate hikes could only occur in the eurozone after a return to an adequate level of long-term expectations, or this would only materialize with a powerful exogenous shock, such as a move to a very expansionary fiscal policy, a significant breakthrough in the European construction or an acceleration of the global economy. Finally, the materialization of a recession in the United States in 2020 or 2021 would prevent the ECB from moving towards a « standard » rate hike cycle.

One of the first things that comes to mind when talking about the « japanization » of an economy is the inability of the central bank to raise its key rates above zero. Indeed, the Bank of Japan has never managed to raise its key interest rate beyond 0.5% since 1995, ie for nearly 25 years. In a reference paper [1] , the Japanese economist Takatoshi Ito – a time considered by Shinzo Abe as possible BoJ governor – defined the « japanization » of an economy as the combination of four factors:

The euro zone does not meet all the criteria of « japanization » as stated by Takatoshi Ito. Growth has been below potential since the 2nd quarter of 2018, but this comes after several years of growth well above potential. In addition, the inflation rate is not negative in the Eurozone, even if underlying inflation has difficulty and very temporarily exceeded the 1% mark since 2014. Finally, another notable difference is that the euro area as a whole [2] did not experience a period of prolonged deflation of asset prices after the recessions of 2009 and 2012-2013, whereas this had occurred in Japan after the crash of the early 1990s .

By contrast, the ECB refinancing rate has been below 1% since 2012 and the natural interest rate is likely below zero. It should be remembered the estimation of natural interest rates is difficult and the uncertainty about the estimates is very high. Yet, an ECB [3] paper published in December 2018 showed that many estimates of the natural rate in the euro zone were negative, even very negative, and that « it is more likely to decline in the future rather than rise » because of demographic factors (growth in the working-age population has been negative since 2011). Peter Praet, chief economist of the ECB, said on Monday the natural rate « is lower than it used to be » and the “likelihood of reaching the lower bound on interest rates is much greater than previously thought. » 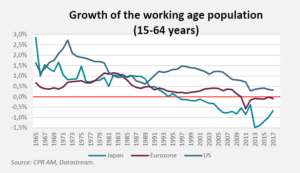 Although there have been significant differences between the situation in Japan since 1990 and the situation in the euro area since 2008, the euro zone is slowly getting closer to a situation of « japanization », as equilibrium real interest rates fell sharply. Like in Japan, the weakness of potential growth in the euro zone means that even relatively small shocks may trigger periods of economic contraction and explain why it will be difficult for the ECB to raise its key rates.

[1]  At the September 2017 FOMC, the Fed did not raise the fed funds but announced its program of balance sheet reduction.

[4]  The situation is different in some countries in isolation: for example, real estate prices fell in Italy from 2012 to 2014 before stagnating.