Laetitia Baldeschi – Head of Research and Strategy at CPR AM

Can macroeconomic fundamentals explain the soaring markets since the start of the year?

If we look at the macroeconomic data across the major regions, nothing has fundamentally changed between the end of 2018 and today.

Clearly, the shutdown in the US is over and its negative impact on confidence has faded very quickly, but beyond that, the data are not very different. Activity remains buoyant if we believe the business surveys and only retail sales at the end of December, particularly weak, have muddied the waters of an economic outlook that is still favourable. Inflation has fallen, as expected, due to the impact of the plunge in the price of a barrel of oil. In the eurozone, surveys portray a less encouraging picture and the overall impression is somewhat more negative than feared at the end of 2018, notably with the sharp downturn in the German manufacturing sector and, more generally, the decline observed in Italy. Further afield, concerns persist over Chinese growth, with the usual disruptions related to the New Year and as yet only partial implementation of the support measures decided on by the authorities. Nevertheless, the financing statistics for the economy published by the PBOC for the month of January are encouraging and indicate that monetary easing is being implemented.

So what has triggered the market recovery?

In the end, the recovery is once again based almost solely on the return of the central banks to the game! A very swift U-turn was made by the US Federal Reserve, which removed all mention of future rate rises from its post-January meeting press release, in particular on account of the deterioration in the economic outlook (slowdown in China, shutdown, Brexit, etc.). Moreover, in a press conference, Jerome Powell refused to specify whether the next rate movement would be up or down, indicating that central bank policy would depend on the data. 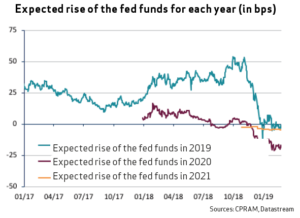 The ECB also joined the FED’s doveish talk in January, once the process of reducing asset purchases ended. The economic slowdown thought to be temporary at the end of 2018 is more serious now, with the markets no longer anticipating any rate hikes in 2019, correctly deciphering the reaction function of the central bank! Even further afield, the Bank of Japan is talking about the possibility of new monetary easing measures, recognising the expected non-compliance with the inflation target both for fiscal 2019 and the following year!

So is it possible that this technology recovery will continue?

It’s true that market growth since last December’s low has been impressive, in a macroeconomic environment that is a long way from sharing the same euphoria. However, we don’t think that results published in recent weeks look like they can support such performance in the long-term. Accordingly, our central scenario (50%) includes a stabilisation of the main equity markets at levels very slightly above today’s. That said, days come and days go and bad news is constantly being brushed aside, in contrast to what we saw in late 2018. Furthermore, we could see this trend continuing, driven by the return of flows on risky assets for a few weeks; we believe this scenario has a 15% likelihood of occurring.

Despite that, are the risks that existed in late 2018 still present?

Yes! And that is exactly why we question the sustainability of such market growth! Of course, if you look at recent events, in particular the postponing of the target date of 1 March for the implementation of additional customs duties on Chinese imports, it is possible to see a more positive side. It looks like the trade negotiations are heading towards an agreement between China and the United States, although details remain uncertain. We think a limited agreement on the “easiest” topics is possible, including an increase in Chinese imports of American products, an agreement on the stability of the Renminbi, several measures designed to reinforce the protection of intellectual property and the promise of greater access to the Chinese market. But this already seems to have been largely anticipated by the markets. In the end there is even a real risk that the markets will be disappointed by the final text! Plus, we mustn’t forget the discussion on customs duties on automotive imports that is still far from over, and which is hanging like a sword of Damocles over the European industry. We’re assessing the probability of this scenario of hardening and disappointment over trade negotiations again at 15%. The last risk that we’re including in our analysis focuses on Europe, a risk whose likelihood remains at 20%; political tensions are in evidence on the eve of the Parliamentary elections. Italy is facing a recession, which will without doubt raise questions about its budgetary targets and will be a source of concern for the markets and ratings agencies. More immediately, the exit of the United Kingdom from the European Union remains an open question, even if the latest timetable proposed by Ms May reduces the probability of a no deal exit on 29 March.

In this context, how should we react?

Quite clearly, the environment is no easier to read and there are plenty of risks. If the sharp drop in the markets at the end of the year seemed excessive given the fundamentals, the impressive rise since early 2019 is equally so. This cautious positioning leads us to maintain underexposure to the benchmark risky assets of equities, in favour of hedges. In terms of geographic exposure, we remain overexposed to the emerging markets (equities but also local currency debt), which are benefiting from this rather favourable environment of interest rate caps. We also maintain a number of positions in search of credit performance, while the rate sensitivity is lowered.