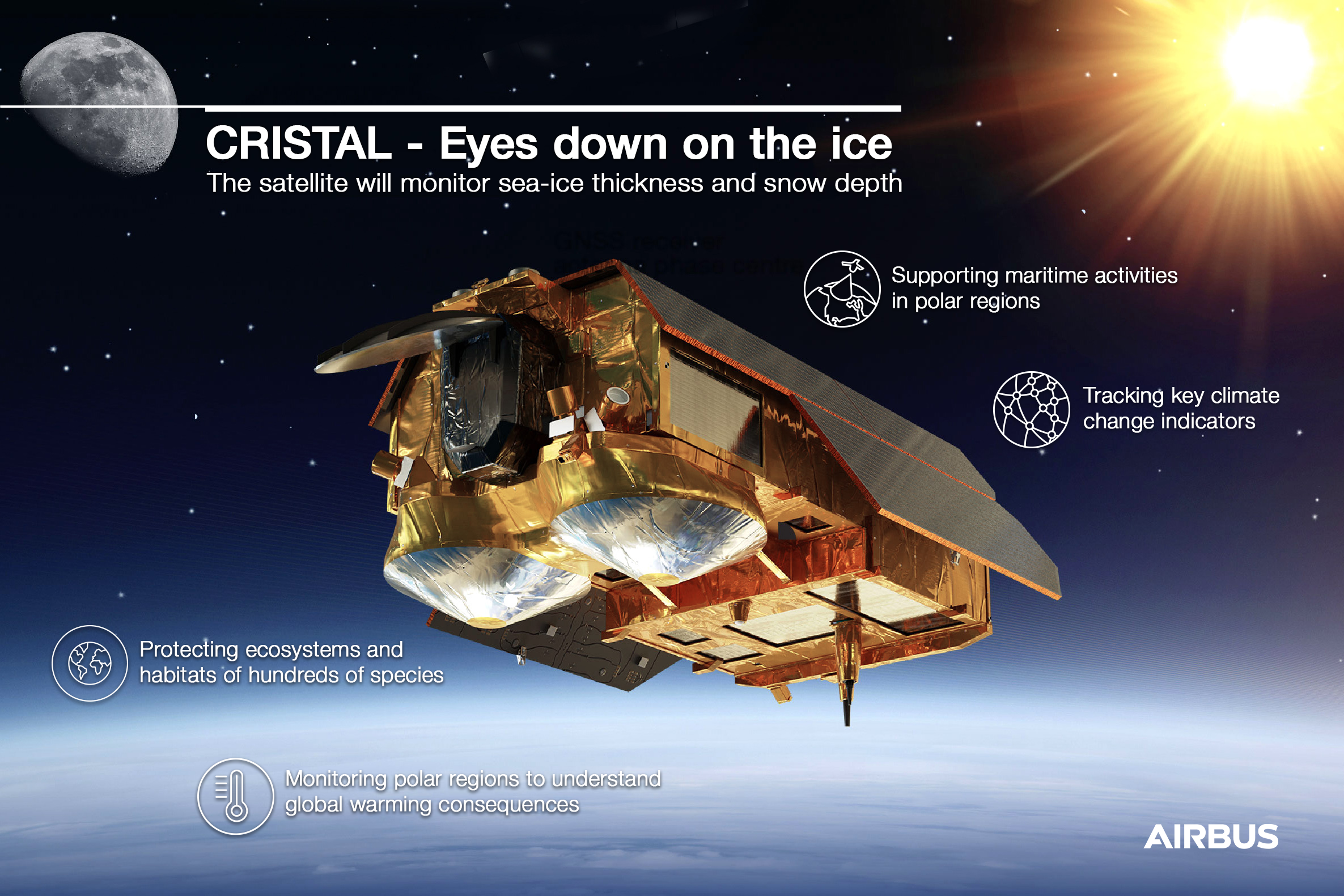 Friedrichshafen – The Copernicus Polar Ice and Snow Topography Altimetry mission CRISTAL is clearly on track. Following an intensive review process the European Space Agency ESA has confirmed that the preliminary design of the satellite meets all system requirements.

CRISTAL will carry an advanced multi-frequency altimeter that will measure sea ice thickness and ice sheet elevations – key climate change indicators. The CRISTAL altimeter will for the first time measure snow coverage of the ice sheets which will improve data quality significantly compared to its predecessor CryoSat-2. These data will support maritime operations in polar oceans and contribute to a better understanding of climate processes.

The Preliminary Design Review (PDR) was organised using a new more collaborative format. As a first step an extensive review by over 60 ESA engineers of a comprehensive data package, established by more than 100 engineers led by Airbus took place over four weeks. In a second step the major findings were intensively discussed in an interactive way between senior level experts both on ESA and Industry side up to the successful completion of the review.

CRISTAL will also support applications related to coastal and inland waters and the observation of ocean topography. The mission will ensure the long-term continuation of radar altimetry ice elevation and topographic change records, following on from previous missions such as ESA’s Earth Explorer CryoSat, also developed by Airbus and working flawlessly for 12 years, well beyond its design lifetime. Monitoring the cryosphere is essential to fully assess, predict and adapt to climate variability and change.

The 1.7 ton spacecraft is based on a proven, robust Airbus satellite design building on the heritage from Sentinel-6 and CryoSat. Six fixed and two deployable solar arrays – 18.6 m² in total – ensure enough power on CRISTAL´s drifting polar orbit at 699 km above the Earth. Its on-board memory will be able to store up to 4 terabits of science data at once, providing scientists with a wealth of information during its 7.5 year lifetime.

The Airbus Defence and Space site in Friedrichshafen (Germany) is heading an industrial consortium involving companies from 19 countries to deliver the project, including Thales Alenia Space to provide the IRIS Interferometric Radar Altimeter. Following the successful PDR the CRISTAL project is now on track for the Critical Design Review (CDR) scheduled for May 2024. The satellite platform and instrument will then be integrated and tested in the new, highly digitalised integration centre at Airbus in Friedrichshafen. CRISTAL is currently scheduled for launch from the European spaceport in Kourou in 2027.