In line with the moderation in export performance in the region, non-oil domestic exports
(NODX) growth eased to a still-robust 12.7% in July from 15.9% in June, close to the
consensus forecast of 12.0% but higher than our forecast of 8.8%. On a sequential
seasonally adjusted (sa) basis, NODX growth turned slightly negative to -0.9% m-o-m sa
from 6.0% in June.
As we expected, electronics exports remained strong, expanding by double digits at
15.0% y-o-y amid the sustained tech upcycle, though moderating from 25.5% in June
(Figure 1). Non-electronics export growth also moderated slightly to 12.1% from 13.2%,
partly reflecting high base effects of surging gold exports last year. Growth of gold
exports fell to -85.5% y-o-y from -66.5% in June on a high base effect. Excluding gold,
NODX growth rose further to 26.3% y-o-y in July from 24.1% in June and 20.1% in Q2. In
line with our expectations, growth of pharmaceutical exports rose strongly to 48.3% y-o-y
from 8.0%, consistent with rising pharmaceutical production (see Asia Insights –
Singapore: Growth and inflation paint a mixed picture in June , 27 July 2021).

By destination, growth of exports to China increased strongly to 58.5% y-o-y from 27.5%
in June, driven by a surge in specialized machinery in line with robust semiconductor
demand, according to the press release. Meanwhile, growth of exports to the EU surged to
61.5% y-o-y from 36.7%, in line with rising pharmaceutical exports. All these helped to
offset the deeper contraction in exports to the US of 50.7% y-o-y, worsening from a 10.5%
contraction in June, but partly reflecting the high base effects of gold exports.
Nomura’s view: We maintain our 2021 GDP growth forecast at 7.1%
We maintain our 2021 GDP growth forecast at 7.1% in 2021, which is still above the
official forecast range of 6-7% and the consensus forecast of 6.6% despite our recent
downgrade from 7.5% (see Asia Insights – Singapore: A rare upgrade in the official GDP
growth forecast for 2021 , 11 August 2021). We expect NODX growth to remain robust,
helped by the sustained tech upcycle and robust demand for pharmaceutical products
amid global vaccine production. Our recent downgrade already takes into account signs of
external demand slowing, consistent with Nomura’s leading index of Asian exports
(NELI) moderating in August and September (Figure 2), which in part reflects slower
growth in China (see Asia Chart Alert – Nomura’s leading index of Asian exports , 16
August 2021).
However, our optimistic view continues to be underpinned by a strong expansion in the
manufacturing sector, driven by the sustained tech uptrend, while global vaccine
manufacturing is also boosting pharmaceuticals output. Importantly, the four-stage
reopening is likely to be implemented as planned (see Asia Insights – Singapore: Growth and inflation paint a mixed picture in June , 27 July 2021) as 76% of the population has
been fully vaccinated as of 15 August and 82% have received at least one dose (Figure
3). Based on the current pace of vaccine rollout, we continue to expect 80% of the
population will be fully vaccinated by the end of August, paving the way for the further in september. 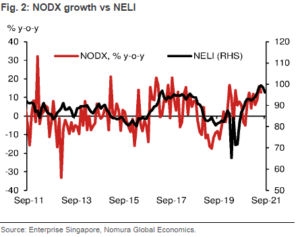 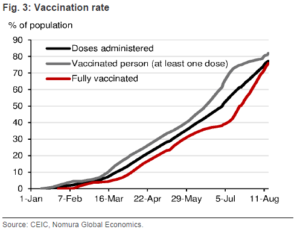