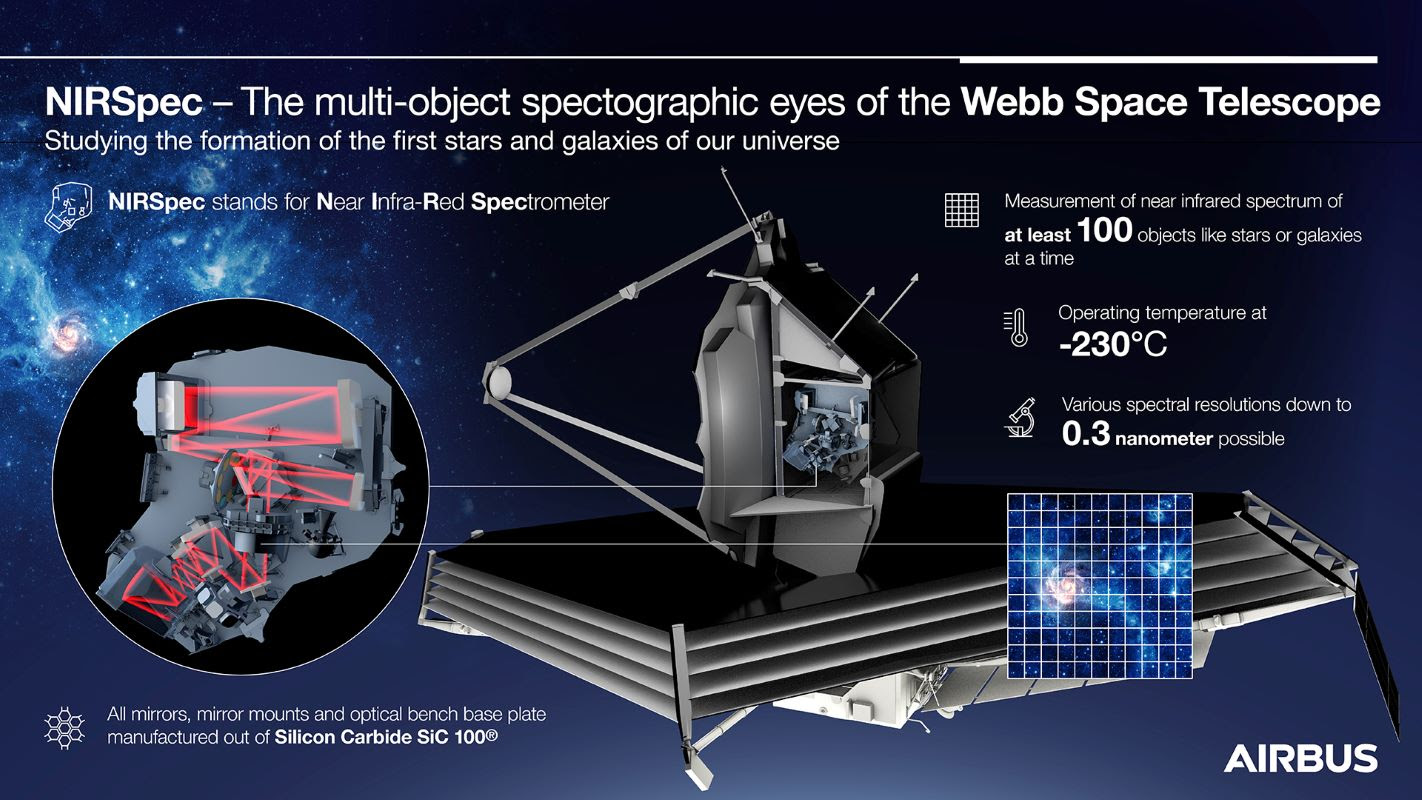 Kourou, French Guiana, 18 October 2021 – Last stop, Kourou. The Webb Space Telescope (WST) has arrived at the European space port in Kourou, French Guiana. The spacecraft will now be prepared for its launch, scheduled for 18th December on an Ariane 5 launcher. One of the four instruments in its scientific suitcase is the Near InfraRed Spectrograph (NIRSpec) built by Airbus in Germany.

Prior to launch, a complete functional test campaign will be carried out in October to make sure that every part of the spacecraft is still working as expected following its journey to Kourou. Airbus will actively support the final electrical functional tests of the four science instruments (including NIRSpec) that will last approximately six days.

“The Webb telescope will change the way we see the Universe,” said Jean Marc Nasr, Head of Airbus Space Systems. “Our contributions to NIRSpec and MIRI instruments are a testament to Airbus’ expertise and the value we can bring to modern astronomy. We are proud to have played a key part in the future discoveries of the Webb mission.”

Once in orbit, Webb will begin a month long journey, travelling four times the distance to the Moon, until it reaches its final destination, the Lagrange point L2, some 1.5 million km behind the Earth as viewed from the Sun.

Airbus will support NIRSpec from launch to commissioning (until the second quarter of 2022) by monitoring its parameters 24/7. This includes the period during the critical cool-down phase and then the initial functional testing when the NIRSpec instrument is turned on. Finally the Airbus engineering team will also continue to support during performance check out and calibration until the end of commissioning.

The NIRSpec instrument, weighing 200 kg, is a multi-object spectrograph capable of simultaneously measuring the near infrared spectrum of at least 100 objects like stars or galaxies with various spectral resolutions down to 0.3 nanometre. The observations are performed over the wavelength range from 0.6 to 5.0 micrometre. Once in operation, NIRSpec, known as the ‘super eye’, will operate at a temperature of -230°C. A team of more than 70 people at the Airbus sites Ottobrunn, Friedrichshafen and Toulouse worked on the design, development and finally the integration and test of NIRSpec, supported by 17 European subcontractors and NASA. The instrument was developed by Airbus for the European Space Agency (ESA).

Due to its excellent sensitivity, its high resolution, and its wide wavelength coverage, NIRSpec is a key instrument to achieve a deeper insight into the evolution of the universe. It utilises a highly a-thermal concept with all mirrors, the mirror mounts and the optical bench base plate all made from Silicon Carbide Ceramic SiC 100®.

Another instrument called Mid-InfraRed Instrument (MIRI) is also part of Europe’s contribution to the Webb mission. Airbus in the UK provided management, engineering and quality management for the European consortium that built MIRI to ensure there was a consistent approach to the design, build and test process. It covers the mid-infrared wavelength range from 5 to 28.3 microns. MIRI will be capable of penetrating thick layers of dust obscuring regions of intense star birth. It will see the first generations of galaxies to form after the Big Bang, and it will study sites of new planet formation and the composition of the interstellar medium. To ensure the signal from faint objects isn’t drowned out by the instrument’s own infrared glow, MIRI will be cooled down to -266°C, just 7°C above absolute zero.

With the NIRSpec instrument, Webb will study the formation of the first stars and galaxies in our Universe, when it was only a few hundred million years old. NIRSpec will be able to capture the spectra of typically 60 to 200 galaxies at a time, allowing scientist to observe in exquisite details how they formed and evolved. Much closer to us, NIRSpec will also be able to study the atmosphere of exoplanets, these planets orbiting stars other than our Sun. It will, in particular, search for the signature of key molecules like water.

Webb, the follow on mission to the Hubble Space Telescope (HST), with its set of scientific instruments will allow looking further back in time compared to HST, mainly due to its higher sensitivity and a wider wavelength band, ranging between 0.6 and 27 micrometre. It is expected to yield astonishing breakthroughs in infrared space science. The $10bn Webb Space Telescope is a joint venture between the US, European and Canadian space agencies.