New report: The impact of the war on Europe’s economic recovery

The war in Ukraine risks upending Europe’s economic recovery. Higher energy prices and trade disruptions could destabilise EU firms already weakened by the pandemic. At the same time, the European Investment Bank’s (EIB’s) economic models show that rising inflation could push more Europeans under the poverty line. Real economic growth in the European Union is now expected to fall below 3% in 2022, down from the 4% estimated by the European Commission before the war. A recession could happen, and further trade disruptions or increased economic sanctions would increase the risk for the European economy.

These are some of the main findings of a new report titled How bad is the Ukraine war for the European recovery? published today by the EIB. The new report analyses the economic shock caused by the war, and the ensuing fallout for households, firms, banks and governments.

The EU economy’s recovery from the COVID-19 impact was still firming up when the war broke out. Heightened uncertainty and higher food, commodity and energy prices are impacting investment and sustainable and inclusive economic development,” said EIB VicePresident Ricardo Mourinho Félix. “Maintaining good public policy coordination will be crucial to managing the economic impact of the war and will send a clear signal to markets, reducing uncertainty and tempering the risks of a new recession. The EIB Group stands ready to extend long-term financing at favourable rates to shelter a green and sustainable recovery and support inclusive growth.”

“Inflation and higher energy prices pose a new risk to EU firms already weakened by the pandemic. Our models show that in one year, the proportion of firms at the risk of default rises from 10% to 17%. In response, we need to implement clear policies to protect firms and ensure that public investment is fully used to catalyse private investment,” said EIB Chief Economist Debora Revoltella whose team authored the report.

Increased risk of poverty: households will be hit differently across and within countries

Inflation triggered by the war could reduce real private consumption in the European Union by 1.1%, although the impact will vary across countries. The impact will be felt more in countries where consumption is more sensitive to energy and food prices and where a relatively large share of the population is at risk of poverty. Countries in Central and South-Eastern Europe tend to be more affected.

The increase in food and energy prices will hit low-income households disproportionally, but to varying extents across EU Member States. Lower-income households in the richer countries of Northern and Western Europe are better able to absorb the price rise than households in Central and South-Eastern Europe, largely because savings rates and incomes overall tend to be higher. 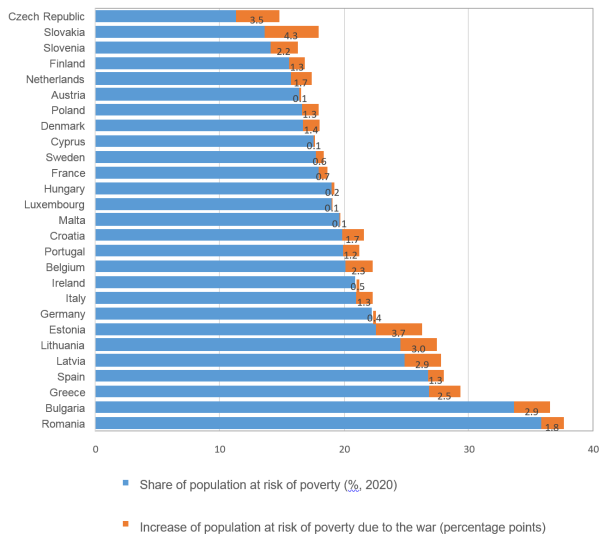 During the COVID-19 crisis, policy measures were key in keeping poverty at bay. In the current crisis, policies need to be deployed to reduce risks for vulnerable households and to maintain social inclusion.

EU firms, especially smaller ones, were weakened during the COVID-19 crisis. Their ability to withstand the withdrawal of policy support was already uncertain. The war will exacerbate firms’ vulnerability, through three channels:

Firm-level simulations conducted by the EIB suggest the proportion of firms losing money will increase from 8% to 15% in one year, and that the share of firms at risk of default will rise from 10% to 17% over the same period. Chemicals and pharmaceuticals, transport, and food and agriculture are the sectors hardest hit. Firms in countries closer to Ukraine and Russia, such as Hungary, Poland, Latvia and Lithuania, will feel the pressure. Companies in Greece, Croatia and Spain will also suffer more than the EU average.

Increase in the share of firms reporting losses (in percentage points) 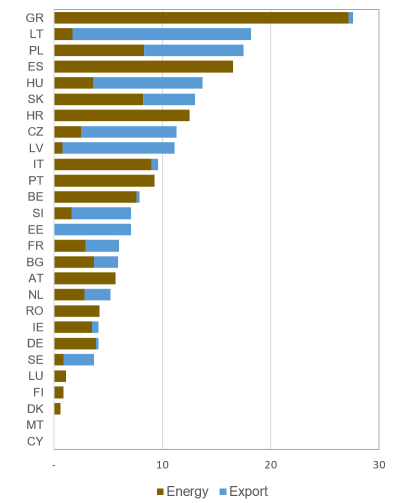 The impact on banks should remain contained, but firms’ access to external sources of finance may worsen. Overall, the European banking system has little direct exposure to Ukraine, Russia and Belarus, except for a handful of banks. However, these banks have shored up their capital buffers sufficiently to withstand the write-down of some of their assets in Ukraine and Russia. Despite that, credit standards have started to tighten, especially in the Central, Eastern and South-Eastern Europe region.

The finances of EU Member States will likely deteriorate

Spending could rise as countries host refugees, implement redistributive measures to help households cope with energy price increases, and increase military spending. Revenue is also likely to be lower than planned given the slowdown in economic activity, just as military spending is set to rise. Overall, budgets are expected to be most affected in EU members neighbouring Ukraine and in the Baltics. Funds available from the Recovery and Resilience Facility may give governments fiscal room for manoeuvre.

About the European Investment Bank

The European Investment Bank (EIB) is the long-term lending institution of the European Union and is owned by the EU Member States. It makes long-term finance available for sound investment in order to contribute towards EU policy goals both in Europe and beyond. The EIB is active in around 160 countries. It is one of the largest multilateral providers of climate finance worldwide and recently announced that it will unlock and support €1 trillion of investment in climate action and environmental sustainability in the decade to 2030. At least 50% of EIB finance will go towards climate action and environmental sustainability by 2025. By the end of 2020, all EIB Group financing activities will be aligned with the goals of the Paris Agreement.

Find out more about EIB research: Our research (eib.org)