The UK government’s introduction of the mini-budget negatively affected the country’s economy, which was already reeling from high inflation, the Russia-Ukraine conflict, Brexit, and the supply chain issues triggered by the pandemic. Against this backdrop, GlobalData, a leading data and analytics company, expects the UK economy to grow at 3.5% in its October 2022 forecast compared to the previously estimated 4.3% in February 2022 before sliding into a recession (-0.2%) in 2023.

Aiming to kickstart the UK economy, the mini-budget, through ‘The Growth Plan’, announced a range of measures including tax cuts worth £45 billion, a freeze in energy bills, VAT free shopping for non-UK visitors and a reversal of the National Insurance rise. Since these were unfunded measures, putting the public finances on an ‘unsustainable path’, investors lost confidence in the UK market which resulted in a financial market disruption.

Following the announcement of the mini-budget, the FTSE 100 hit a three-month low and pound sterling depreciated sharply against the dollar. The UK stock market was down by 7.1% and pound per dollar depreciated by 16.4% on a year-to-date basis on October 21, 2022.

Arnab Nath, Economist at GlobalData, comments: “A sharp depreciation of the currency will make imports (including raw materials) costlier and will further increase the price of products making life more difficult for UK consumers. However, excluding a cut in stamp duty and a national insurance rise reversal, most of the measures announced in the mini-budget have been scrapped by the new finance minister, but getting the economy back on track remains a real challenge for the government.” 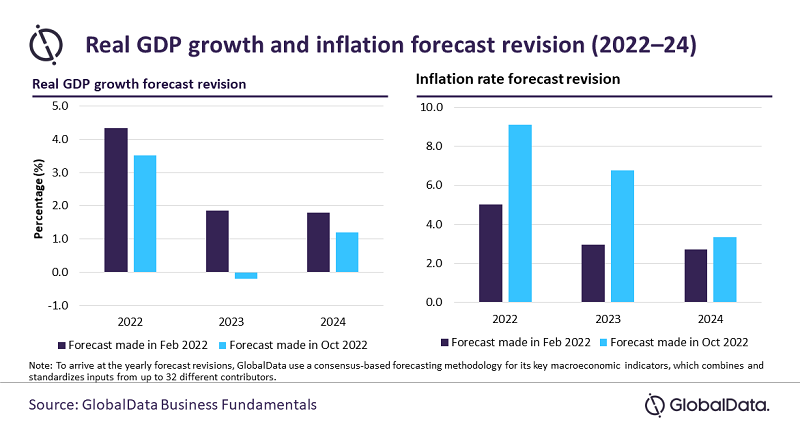 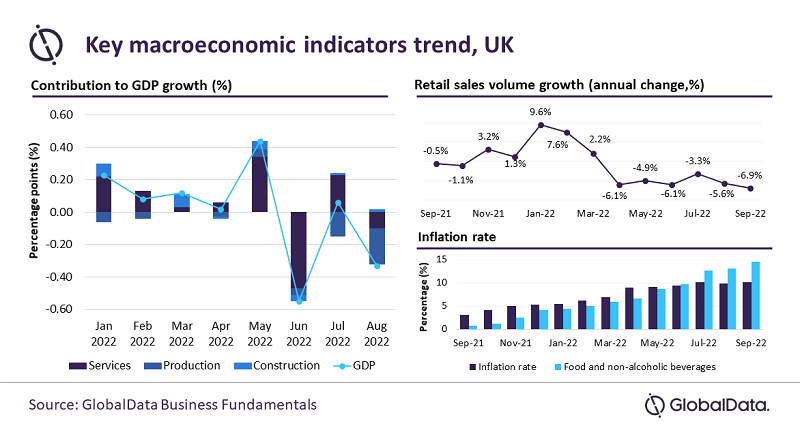 Like other European economies, the UK economy’s inflation rate reached a 40-year high of 10.1% and food prices reached a 42-year high of 14.6% in September 2022. GlobalData forecasts the inflation rate will remain at an elevated level of 9.1% in 2022, which is a sharp upward revision from the 5% rate projected in February 2022.

Consumers in the UK remain the most vulnerable to the fallout with the European Commission finding that the UK’s consumer confidence index was at -49 in September 2022, which was the lowest level since the index began in 1974. Retail’s sale volume recorded an average decline of 5.5% during April to September 2022. GlobalData forecasts the real household consumption expenditure to contract by 0.3% in 2023.

The UK’s real GDP contracted by 0.3% in the three months ending August 2022, with a contraction of 0.1% in services and 0.2% in production. Despite the economy slipping into a recession, the Bank of England (BoE) hiked its policy rate by 50 basis points (bps) in September 2022, its seventh straight move to raise the borrowing costs to tame the cost-of-living crisis. Mortgage rates increased to 5.1% in September 2022, the highest since December 2008, according to the BoE.

Nath concludes: “Households are faced with shrinking disposable income due to higher prices, affecting the sales of luxury items as people are paying higher prices for essential goods. On the other hand, home buyers are expected to defer their plans amid rising mortgage rates which may slowdown the housing sector growth. A new fiscal/monetary mix is required to cushion the negative impact of these external shocks by means of targeted fiscal support, while a contractionary monetary policy is needed to tame rising price pressures.”

UK retail sales data were released this morning. Retail sales ex. auto fuel printed at -1.5% m-o-m, which was lower than consensus (-0.4% m-o-m), indicating a continued weakening of the UK’s retail climate. This comes at a time when soaring energy costs are forcing consumers to cut back on discretionary spending.
•Also, the UK GfK Consumer Confidence survey was higher than expected at -47, and compares with consensus forecasts of -52. This is a slight uptick from September, but is still one of the weakest prints on record.
•Both these data releases support our view that consumption will fall in Q3 2022, along with GDP as a whole. However, we believe elevated inflation will encourage the Bank of England to continue with monetary tightening in spite of weak consumption.
•UK retail sales ex auto fuel data came in weak today at -1.5% m-o-m, and were considerably lower than consensus (-0.4% m-o-m), supporting evidence of an imminent recession in the UK. UK retail sales including auto fuel also fell by -1.4% m-o-m.
We now have a full set of retail sales data for Q3 2022, so have a good indication of the direction of consumption in Q3 UK GDP. In the past quarter, total retail sales fell by 3.0% q-o-q with no broad categories seeing positive growth. The fall was relatively broad-based, with both food and non-food stores falling by almost the same amount. Their weighting in overall retail sales is almost identical.
Taking a deeper dive into the retail sales data there are a few outliers to the wider trend. For example, second-hand goods saw a sustained rise. The trend towards purchasing second hand goods is as expected as the economic climate worsens and consumers look
to make savings on their household budgets. Categories such as watches and jewellery saw some of the largest falls because they are the type of consumption that consumers can easily reduce their spending on in times of recession.

We also saw continued weakness in the GfK Consumer Confidence survey, although in contrast with retail sales, this came in higher than consensus (-47 vs consensus -52). We saw that consumers are especially pessimistic about the general economic situation and
there are continuing signs that consumers believe now is not the right time to be making
major purchases.
Both these data prints fit into the wider picture of weakening consumption also indicated by the August monthly GDP figure, which was pushed down by consumer-facing services.

For the UK, we are forecasting a recession to last four quarters beginning in Q3 2022. Nomura is projecting GDP to fall by 2% from peak to trough, more than consensus but less than the Bank of England.

We see energy price inflation as the main drag on economic activity in the UK. For businesses their costs have skyrocketed, and they are responding by cutting investment and reducing industrial output. For consumers, higher energy bills are forcing them to cut back on non-essential spending. In addition, we expect the Bank of England to continue its aggressive monetary tightening to prevent inflation becoming entrenched.

Rarely can a recession be avoided in such forceful hiking cycles. This will hit retail sales
and economic activity generally as households feel the burden of higher mortgage rates and other borrowing costs.
Our view remains that after a 75bp hike in November the Bank will raise rates by another 75bp in December, followed by 50bp in February and ending with 25bp in March. That would take Bank Rate to a peak of 4.50% by end-Q1 2023. We believe that persistently high inflation will force the Bank of England to continue with aggressive rate hikes despite the consequences for consumption. In recent weeks, Bank of England speakers have strongly emphasised their commitment to price stability, even if that comes at the cost of growth.