View in a Nutshell

The current period of significant political and economic flux across the world serves to underscore just how much of a rock of constancy Queen Elizabeth II has been in our lives over the past seven decades. Our thoughts are with the Royal Family as we write this Weekly. During the period of mourning the ONS has said it will continue to publish next week’s market-sensitive data (GDP, labour market, inflation, retail sales), all of which will be important inputs into the Bank of England’s decision-making process. The Bank’s decision itself has been postponed from Thursday 15 to 22 September, at which point we see the MPC voting for a 50bp hike, which is in line with market pricing. The extra data the Bank will have, alongside any Budget loosening, could risk a larger tightening.

It’s a key week for the UK with GDP, labour market, inflation and retail sales due ahead of the following week’s (rescheduled) BoE meeting. The German ZEW and EA IP are due.

This week we take a look at bankruptcies in Germany and France, which look to be on the rise as firms are struggling with lower demand and rising costs, exacerbated by avoluntary reduction in energy usage. In addition, we show that the number of ships stuck in ports remains elevated, suggesting that supply chain pressures remain a problem. European Economic Outlook We see recessions starting from H2 this year in Europe lasting through H1 2023. The combination of: i) a US recession and China slowdown, ii) the effect of Russia/Ukraine on confidence, inflation and energy supplies, and iii) financial conditions worsening is the rationale behind our forecast. Despite being a clear negative supply shock, central banks are keen to lean against high inflation. Hence, our view of tightening despite the weaker growth outlook. We now expect the ECB to hike by 75bp in October and December, then ending with a 25bp hike in February next year (for a peak of 2.50%). We see policy being eased from September 2023. We expect 50bp hikes from the BoE in its final three meetings of the year, 25bp hikes in February and March, then cuts from August 2023.

Our Forecasts in Charts
We chart our forecasts for inflation, economic growth and policy rates for the euro area and UK and show them relative to central bank, consensus and market views. 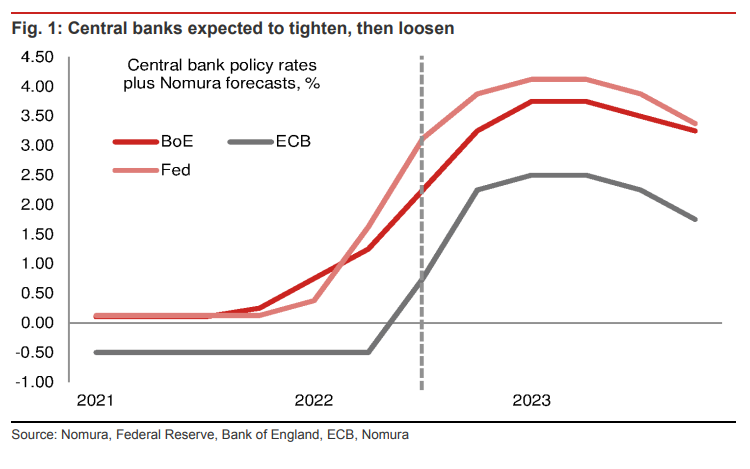 View in a Nutshell: euro area

Is the ECB’s aggressive hiking posing problems for French mortgage lending? At its September meeting, the ECB raised rates aggressively by 75bp, as we had forecast (ECB continues to front-load, delivering on 75bp ). In the press release, the Bank talked of front-loading rate hikes, which supports our view that the ECB will continue hiking more aggressively in the near term in an effort to bring down core inflation, which risks remaining uncomfortably above target for longer, owing to recent price data momentum, and to ensure that inflation expectations do not de-anchor.
Following yesterday’s meeting, we raised our ECB call, and now expect +75bp in both October and December, from +50bp previously. We still expect +25bp in February next year as the ECB becomes cautious approaching the upper bound of the neutral range and firm default risks become apparent. This would bring the deposit rate to 2.25% by end-2022, and 2.50% by end-Q1 2023.

That said, we expect three cuts of 25bp from Q3 2023, and so forecast the deposit rate being 1.75% by end-2023 (Figure 2). Some may applaud the ECB for taking decisive action to contain inflation and bring it to target, others may be less happy, such as French banks and mortgage borrowers. In France, there exists a legal upper bound on mortgage rates, which is equal to the average of rates over the past quarter plus a premium. As we see in Figure 3, the ECB raised all three key interest rates by 50bp; however, new mortgage rates increased by only 10bp. The wedge between ECB policy rates and new mortgage rates will likely widen as the ECB continues to hike aggressively in the near term, only gradually converging.
A cap may seem like good news for borrowers; however, the problem is that with the ECB tightening aggressively, commercial banks appear less willing to lend. They contend that policy rates are rising above the cap and depressing margins, according to Bloomberg. French Finance Minister, Bruno Le Maire, told BFM TV that discussions are ongoing regarding the cap, and a possible solution includes increasing it. In response, the French Banking Federation issued a statement, saying “the banking profession is sensitive to the need for the cap measure for protecting borrowers to not become a mechanism that prevents households from financing their solvent projects ”.

We expect the French government to intervene so that new mortgage rates can rise more swiftly in line with ECB policy rate rises, as not doing so would result in a temporary drying up of credit to households until rates converge. However, we caution the adverse effect this could have on households: less disposable income for non-housing-related expenditures as people spend a greater share of their income on mortgage payments.
More generally, we continue to closely monitor loan default risks as interest rates are set to markedly rise. Household and firm debt remain elevated in France, as well as the wider euro area, and we are conscious that credit risks will only intensify going forward; already for June 2022, firm bankruptcies are up 61% y-o-y.

View in a Nutshell: UK

The Bank of England announced this week that it would delay its 15 September monetary policy decision to a week later (22 September), following the end of the mourning period for Queen Elizabeth II. But what could that mean for the outcome of the decision itself? Is there a greater possibility that we could see a 75bp rather than 50bp hike on account of a one-week delay?
The short answer is: potentially, yes. There is, after all, a lot of news expected in the additional week between the old and new meeting dates for the MPC to digest. First, there’s the scheduled economic data, which the ONS has said it intends to continue to publish. However, not all of the data may necessarily be stronger: We see GDP recovering in July from its June decline (published Monday), though bear in mind that the level of output in June was the lowest since the end of 2021 so a small recovery (both ourselves and consensus are looking for +0.3% m-o-m) may still mean weak levels of output persist.
• The focus of Tuesday’s labour market data will be on earnings, where ex-bonus private sector pay has risen at a strong average monthly clip of 0.6% m-o-m over the past six months. It may be the case that monthly earnings growth is not as strong as recent outturns, but we still think a robust monthly rise is likely. Vacancies are expected to continue to fall (albeit from high levels) based on data from Adzuna.
• We see Wednesday’s August inflation print falling to 9.9% y-o-y (from 10.1% in July), though that’s because of a combination of base effects and falling petrol prices rather than any underlying slowing in core price momentum. It will be important to monitor the monthly momentum in core prices, which we see continuing apace (see Figure 5).
• Official retail sales are published on Friday – we see a small monthly decline in August though note the survey evidence has been mixed (CBI recovering strongly, BRC reporting the weakest annual growth in real sales for a decade).
• Then there’s the mini/emergency Budget. The Bank will already have digested the government’s plan to cap household energy bills at £2,500 for the next two years (which is estimated to cost £90bn of the £150bn package – the remainder providing support to businesses over the coming six months) and the government is set to announce further fiscal loosening at the emergency budget on Wednesday 21 September.
This, Mr Kwarteng’s first fiscal statement as Chancellor, is set to incorporate a reversal of decisions to raise National Insurance and corporation tax, which together will cost the Exchequer a further £30bn. While that plan will of course be already known by the Bank nof England, the MPC will not (fully) take into consideration these decisions until they are confirmed – which is Bank protocol.