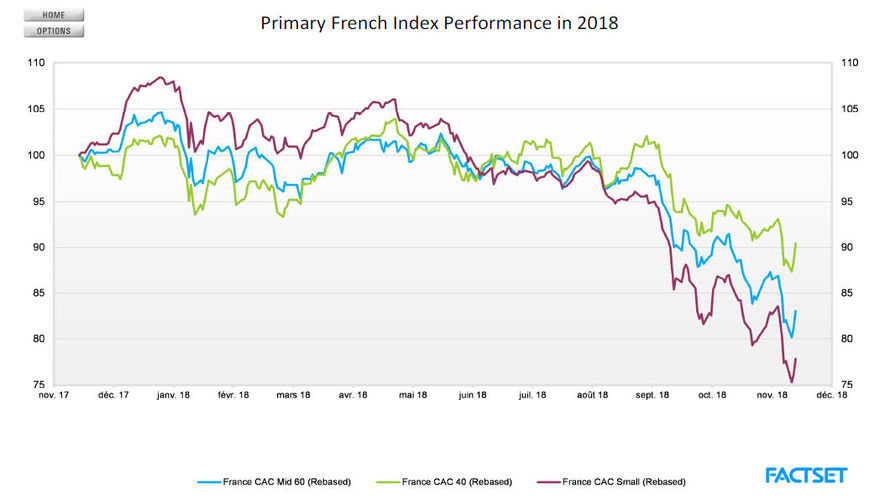 By Eric Labbé, Thematic equity manager at CPR AM

1-1 A bloodiest fourth quarter After a lacklustre overall performance during the first nine months of the year, the main stock markets fell sharply in Q4 to finish the year at their annual lows. 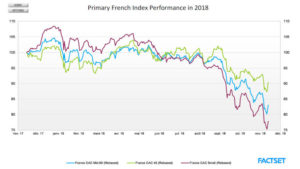 In a context of anxiety, the correction was even more severe for the French small and midcaps, which were the collateral victims of a flight to liquidity movement, with the following specific sequences:

Overall, French small and mid-cap funds recorded outflows of more than 10% of total assets over the year – source: Portzamparc – of which more than 8% in the second half of the year with peaks in October and December. In addition, 50% of the outflows from mid small cap equity funds in the euro zone were concentrated in France – source Exane.

1-2 An upturn in profit warnings

Although 2018 was not such a bad year, it was nevertheless characterized by a significant number of profit warnings with around 45% more profit warnings than the average of the last 4 years, which can be explained by the following reasons in particular:

This increase in profit warnings has also impacted companies with a defensive profile. Many of the 2018 equity underperformances occurred in a single trading session during which the stock was heavily punished following a disappointing publication.

Indeed, mid and small caps started the year with a 25% premium over large caps, while their earnings growth was equal to that of large companies. Historically, however, the earnings growth gap has been 50% in favour of small and mid-cap companies.

1-3 Performance analysis of the CAC mid 60

The CAC Mid 60 posted a very poor performance with a decline of -19.04% in 2018. The decline was slightly smaller than that of the Paris Stock Exchange Small Cap Index due to greater liquidity and the positive stock market performance of the first three weights of the index.

No sector was immune in 2018 from the fall in equity prices. The most penalized sector was, not surprisingly, the automotive equipment manufacturers following the global tariff tensions and the impact of the new WLTP regulation. Over the year, only 22% of stocks closed in positive territory, while in the last quarter only 10% of stocks recorded a positive performance. 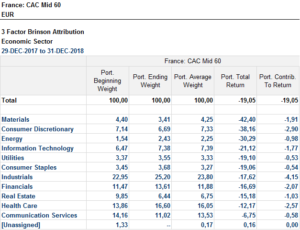 1-4 Performance analysis of the CAC small

The investors therefore « repriced » the liquidity premium of the asset class. 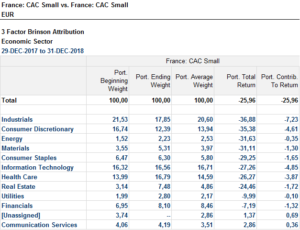 2-1 Quantitative view of the market: repricing in progress and still significant earnings downgrades

In the event of a major crisis, these multiples will lose their significance, but the “excitement” that the mid- and small cap universe has known in recent years has disappeared. 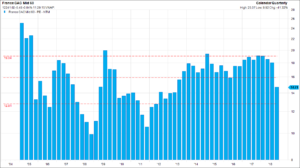 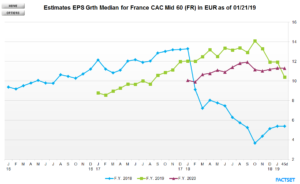 2-2 Qualitative view of the market: more cautious, but not gloomy

The perception of the economic situation is slightly less optimistic than last year.

The parallel with the outbreak of the 2008 crisis remains in everyone’s mind, especially since the magnitude of the impacts had been greatly underestimated in the business perspectives. The answers seem reassuring:

2-3 Market timing : a complex entry point before the publication of the 2018 year-end earnings figures

On the issuers’ side: a certain misunderstanding about the level of current prices will lead to great caution in communication.

The sharp drop in their equity price in the context of press articles dealing with particularly negative business conditions is not in line with their backlogs, which remain at satisfactory levels, thus raising some questions about the appropriate communication of the 2019 outlook. Issuers will be all the more cautious as the base effect versus the fourth quarter 2017 is significant.

On the investor side, a return to the mean valuations could suggests attractive entry points. However, these levels can be undermined by considerations external to the companies’ business models. While the seasonality of the mid cap relative performance compared to the MSCI EMU did not hold over the year 2018 (due to the change in the valuation / earnings growth ratio), our market timing indicator is now at entry points (underperformance of -5% over 3 sliding months).

On the basis of:

It seems to us that the earnings revisions for the « midcap France » asset class are still too high and that the repricing of liquidity risk is not yet completed. Therefore, we will not take the risk of reinvesting before the publication of results.

A comeback for the emerging markets in 2019?

In troubled markets, the dividend is what the investor remembers when he has forgotten everything