43% Of Brits Think The Metaverse Will Drive Us Towards The Matrix, According To Recent Survey 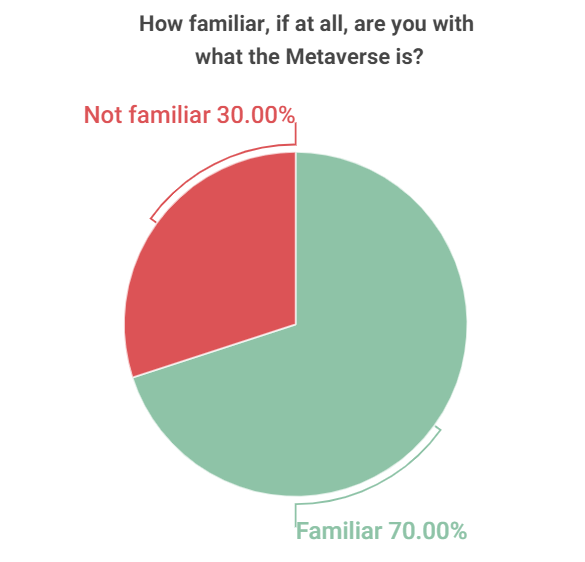 According to the survey, people were asked whether they knew what the Metaverse was to which 30% of participants answered ‘no’.

This was more prevalent among female respondents, with 36% having no idea what the Metaverse is compared with 24% of British men.

It is interesting to note that female participants had more trepidation about ‘socialising’ within the Metaverse, with 45% saying they were scared of the concept, compared with only 36% of men. 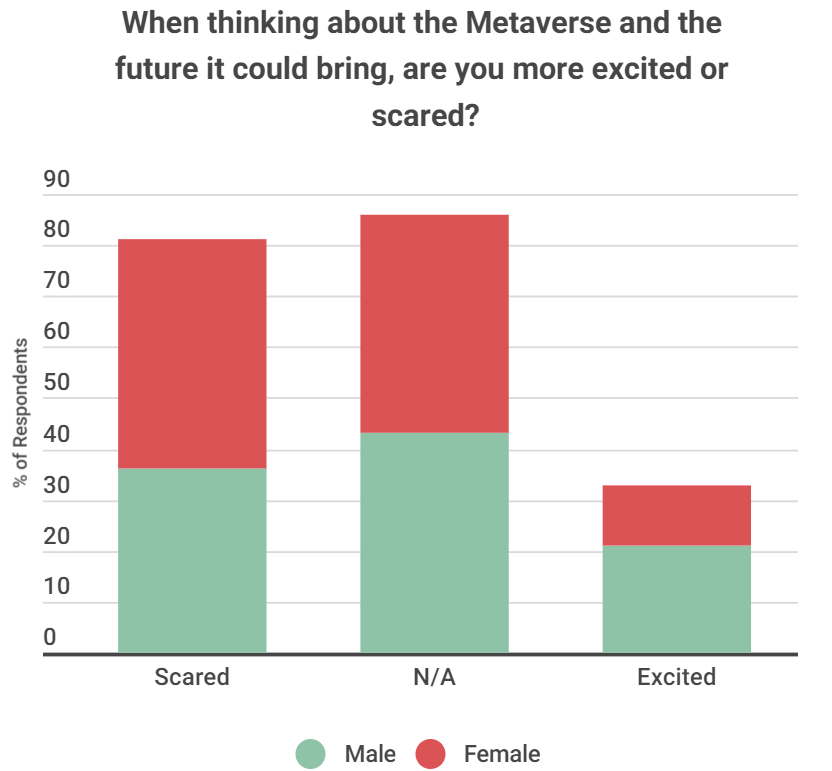 Across the board when combining the two, it would seem people’s hesitancy to accept the Metaverse overrides their capacity to potentially accept it as the next big advancement in social media. For example, 40% of UK adults say they are more scared than excited about the Metaverse, with only 17% saying the reverse. 37% Of Gen Z Would Work In The Metaverse

As it to be expected however, ‘Gen Z’ participants were more accepting of the concept with 37% they would be willing to live out their professional lives at work in the Metaverse as opposed to only 27% of 25-44 year olds.

43% of Gen Z also say they would want to use the Metaverse for social interactions with friends, but only 26% of the overall participant pool said the same.

When delving deeper into the study, it was found that those residing in Scotland may favour their real life interactions as opposed to a virtual arena, with just 18% saying they would use the technology to work or socialise. 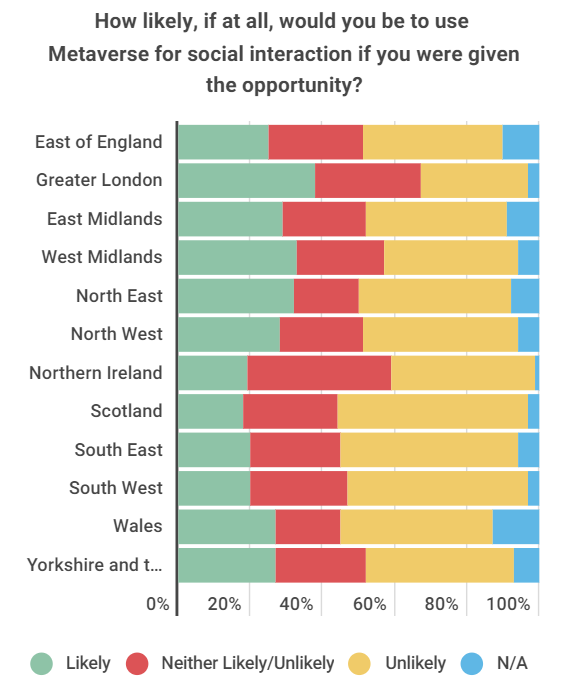 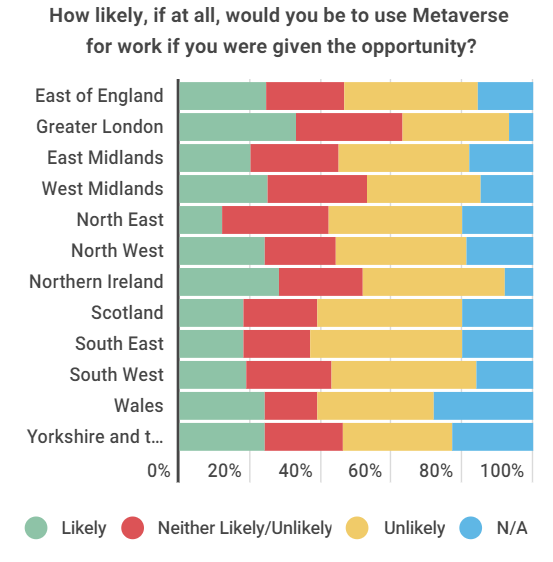 Much like the origins of social media, the Metaverse is designed to bring people closer together who otherwise may not be able to. In this respect, 30% of Brits do think the Metaverse will enable people to meet others that perhaps otherwise wouldn’t meet, while 41% are adamant there are no redeeming features to the concept. 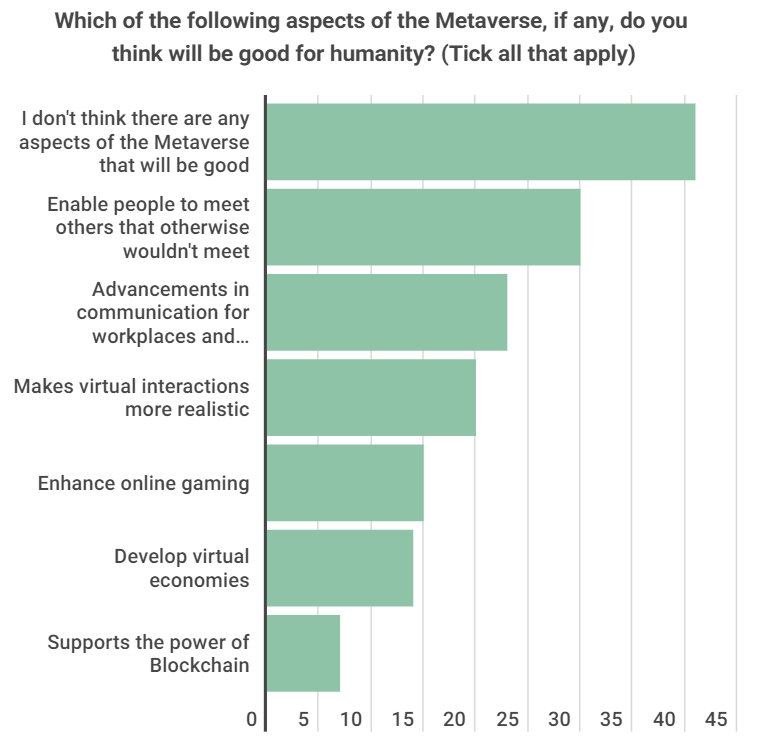 Much like the origins of social media, the Metaverse is designed to bring people closer together who otherwise may not be able to. In this respect, 30% of Brits do think the Metaverse will enable people to meet others that perhaps otherwise wouldn’t meet. 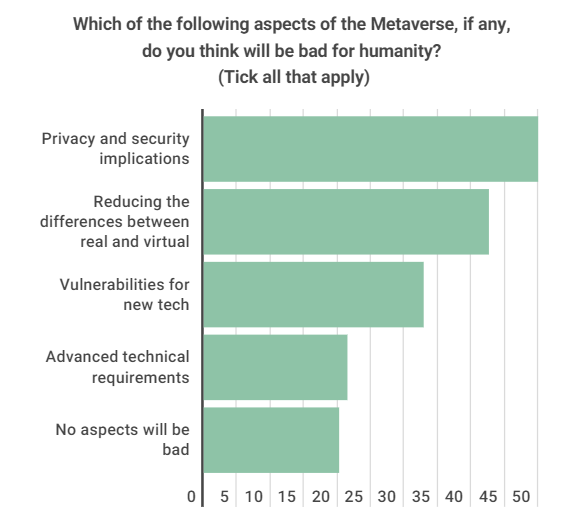 Although an abstract concept, quite a high number of people (43%) in the study believed that the Metaverse could push society towards the ‘Matrix’ where the dividing line between reality and virtual interactions are blurred.

Meta, the umbrella company who owns Facebook, have invested vast amounts of money into the development of this new virtual landscape, but it would seem the public uneasiness to accept is costing them dearly.

Throughout last year, Meta spent in excess of £10bn on research and development for the metaverse, bringing in just over a sixth of that in the few metaverse products’ revenues it relies on.

Shareholders Altimeter Capital wrote an open letter to Mark Zuckerbeg, saying: “An estimated $100bn+ investment in an unknown future is super-sized and terrifying, even by Silicon Valley standards … we think Meta company should cap its metaverse investments to no more than $5bn per year with more discrete targets and measures of success, as opposed to today’s much more ambitious and open-ended strategy.”